The playground will be closed during this time, however where possible the surrounding grounds and picnic areas will remain open for public use.

Thank you to the Community Group who helped choose the colour scheme and design of the playground. As you will see from the design it will cater for kids aged 1 to 14 and will be built in two sections. The equipment for the younger age group will be installed under the existing shade shelter in the Town Centre, while the equipment for the older kids will be built under trees to the west of the existing playground.

Plans to upgrade the existing playground at Emu Park are progressing nicely with equipment ordered and on its way. Weather permitting, it’s anticipated that installation will occur towards the end of March/early April, and Council will keep the Middlemount community updated as plans progress.

The new playground design was drafted based on community consultation in May 2016. Thank you to everyone who gave us their feedback - you can still view the proposed draft design below. 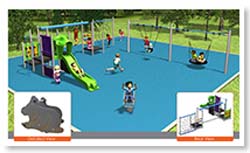 Council engaged with Moranbah and Dysart residents for their thoughts and feedback before upgrading four of the region's premier parks. At the end of 2016, the below playgrounds received complete overhauls and we have been pleased to see so many families enjoying the new spaces.