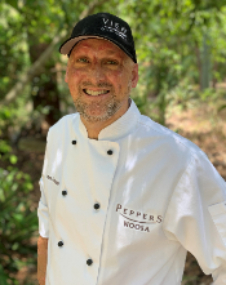 Matt Golinski is a highly regarded, professional chef with a passion for creating cuisine using fresh, seasonal and local ingredients.

Well known as one of the original team members of the popular ‘Ready Steady Cook’ television series, Matt has worked as executive chef at some of Queensland’s leading restaurants and founded his own catering company.

Based on Queensland’s Sunshine Coast, Matt now enjoys working as a consulting chef to restaurants, being a regular guest chef at festivals and events and writing his popular food columns and blog.  He is also an active member of the Slow Food movement and a motivational speaker.

Since 2015 Matt has been helping the Gympie Region promote itself as a world-class food destination in his role as their Food and Culinary Tourism Ambassador. He uses his knowledge of the area and its producers to showcase the region through cooking demonstrations and his blog “Matt Eats Gympie”.

In March 2018, Matt joined the Peppers Noosa Resort team as their Consultant Executive Chef, developing menus that consolidate his knowledge and love of the producers of his region.

Mat spends a couple of days a week in the kitchen at Peppers creating new seasonal recipes, so if you’re in for breakfast, lunch or dinner be sure to poke your head into the kitchen and say hi. If you’d like to know more visit Matt’s official website.