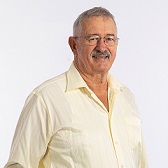 As an elected official, Cr Bethel said it was an honour to stand up for community and work towards the continuous improvement of his division and the region.

“Division 8 is a diverse and unique area, spanning from St Lawrence to Carmila and Ilbilbie on the coast, and inland to Nebo and Coppabella,” he said.

“To have the trust of the community to represent their best interests is a big job to live up to, and over the last 18 years I have always stood up for what I believed was best.

“I would like to thank the community for their drive and passion. Seeing the amazing work of the people in the region is the reason I wanted to work hard representing them for so long.

“I know the Division 8 candidates will do a great job and bring some fresh blood into the Council chambers.”

Cr Bethel had served on the Broadsound Shire and was re-elected in 2012 to the amalgamated Isaac Regional Council.

The outgoing Chair of the Engineering and Infrastructure Standing Committee said the hard work and dedication of the staff in the organisation made him proud to be a Councillor.

“Our Council workforce are some of the best people I have ever had the honour of working alongside. Thank you to the incredible staff for all your work in making the Isaac region a great place to live and work.

“I wish all my fellow Councillors, Mayor Baker, CEO Gary Stevenson and his directors the best for the next four years.

“And my biggest thank you goes to my wife Ruth and our children. Your support and understanding have been a pillar of strength.”

“Geoff has been an absolute asset to the organisation, the region, his division and the communities he has represented,” Mayor Baker said.

“He will be sorely missed as we move forward during a turbulent time in the region, but his years of dedication will remain a testament to the pure people power which drives our region.

“On behalf of my fellow Councillors and myself, I wish Geoff all the best as he makes his way into retirement.”

The next Division 8 representative will be elected during the Queensland Local Government elections held on Saturday, 28 March 2020.