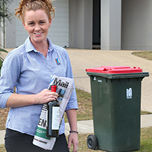 One of the region’s biggest council contracts has now been signed, sealed and delivered after a joint procurement exercise by Isaac and Central Highlands to bring a better deal for kerbside collection

One of the region’s biggest council contracts has now been signed, sealed and delivered after a joint procurement exercise by Isaac and Central Highlands to bring a better deal for kerbside collection.

The two separate contracts, worth more than $40 million collectively over a seven-year period, has been awarded to Cleanaway Waste Management Limited starting from October 6.

“Every year kerbside collection trucks working in the Isaac and Central Highlands regions collectively travel a distance that is more than eight times around the world,” she said.

“This is about bringing a better deal and improved service to our ratepayers and this is a win for all involved.

“I would like to thank staff from both Councils as kerbside collection is a necessity for all our residents.

“I would also like to extend a special thank you to JJ Richards who has been our contractor for the past seven years.”

“Cleanaway’s online customer service portal gives us access to live waste stream data, which we can then use to address issues as they happen and track trends over time,” he said.

“We’re also really excited about the opportunity to work with Cleanaway to develop targeted educational campaigns to help our residents recycle and manage their waste better.”

He said the new contract would represent an approximate savings of $350,000 annually for the Central Highlands.

Mayor Baker said Isaac Regional Council will release the new times and services early September to give residents four weeks to prepare for the new times.

“Cleanaway and Council are working through the final collection schedules where in some cases some towns will have an improved service change, others will have slight variations and in some cases no change to routes,” Mayor Baker said.

“We will communicate these to all our Isaac region communities next month.

“Council will also have a dedicated recycling truck that will be used across the region in towns such as Clermont, Dysart, Middlemount and Moranbah.

“With the changes coming from October 6 - let’s lift the lid and re-energise our waste.”

Mayor Hayes said at this stage the current collection schedule for the Central Highlands would only change for Anakie and Blackwater.

“Cleanaway have worked out the most efficient routes to cover our vast region, resulting in some slight variations,” he said.

“But most areas should remain the same, as will the level of service provided for all residents.”

He said more information regarding these changes would be released next month.