The town of Coppabella was designed to service the junction of two railway lines, one from Goonyella and the other from Saraji Mine. The Goonyella to Hay Point Railway and the Coppabella Railway Station were opened in November 1971.

The name Coppabella was given by Queensland Railways at the suggestion of the General Manager, Central Division. It is said to be an Aboriginal word from a New South Wales dialect meaning ‘crossing place'.

Coppabella is unique in the region for two reasons: the first, that it did not form around an existing pub, and secondly, that it was built entirely by a government department and passed to local government to administer. It is still a ‘closed town' in that it lives and exists only because of the railway. 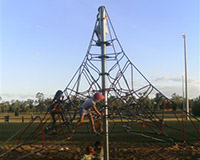 Services and facilities within Coppabella include

Coppabella village features more than 3,000 rooms. It makes working away from home healthier and more productive, providing three meals per day, access to fitness and recreation facilities and a resort style, community atmosphere.
For more information visit the Civeo website.