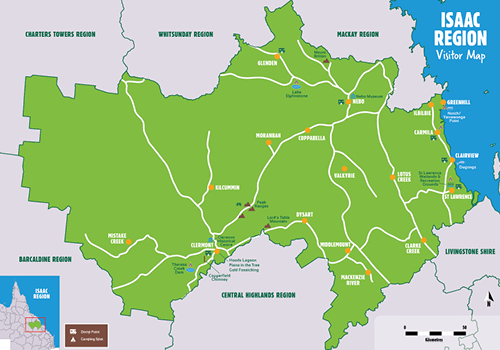 Located in Central Queensland, from the coast to the coalfields, Isaac is 1,000km north-west of Brisbane and 900km south of Cairns, with access to world class export infrastructure; the area is strategically placed to capitalise on the economic opportunities associated with the rise of Asia.

Isaac's Gross Regional Product was $5.95 billion in 2018, growing 10.9% since 2016. Much of the region's economic output is attributable to the resource sector. As at June 2018 the Isaac LGA hosts 27 operating coal mines and four other resource operations. The industry produces 54% of Queensland's total saleable coal and generates 1.1 billion in royalty payments per year.

Agriculture is another key industry for the region. The local value of Isaac Commodities produced is $502.6 million, with $440.4 million from livestock and $62.2 million from crops. The Queensland Agricultural Land Audit identifies two important agricultural areas within the Isaac LGA. An important agricultural area is described as an area that has all the requirements for agriculture to be successful and sustainable, is part of a critical mass of land with similar characteristics and is strategically significant to the region or the state.

Tourism also features on the economic landscape with the Isaac coast identified as an emerging tourism precinct for development in the Mackay Destination Tourism Plan 2014. The coast also hosts commercial fishing and aquaculture operations.