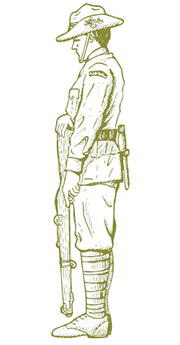 April 25 is a day of national remembrance, marking the anniversary of the first major military battle fought by Australian and New Zealand forces during World War I (WWI).

Anzac Day goes beyond the anniversary of the landing on Gallipoli in 1915. It is the day we remember all Australians who served and died in all wars, conflicts, and peacekeeping operations.

In remembering those first standard bearers of the Anzac Spirit we also remember all Australians who have served our nation in wars and conflict. From World War II, Korea, the Malayan emergency and Indonesian confrontation, Vietnam, the Gulf War, Afghanistan and Iraq.

As well as those who have served on peacekeeping missions around the globe, helping to restore stability in nations such as Timor-Leste and the Solomon Islands

We particularly commemorate those who answered the call to arms in service of their country and paid the ultimate sacrifice in defence of the freedoms we enjoy.

In pausing to commemorate those who have served and sacrificed, our thoughts also go out to those who are still serving on the frontlines.

To our army, air force and navy personnel presently on active service overseas, those supporting them and the families who are waiting for their loved ones to return.

Anzac Day events across the region